It all started in the year 1946 when the farmers of Gujrat were ill-treated by the local traders and they approached Sadar Patel, who suggested that the farmers make their own cooperative. Three pioneers of this movement were Sadar Vallabh Bhai Patel, Tribuvandas Patel and Morarji Desai.

Verghese Kurien left an indelible mark with his billion-litre idea. He was rightly called as the “Father of the White Revolution”.
Dairy farming in India is the largest self-sustaining industry employing largest number of people in rural sector accounting for one third of rural income. India is the world’s largest milk producer in 30 years.

He pioneered the cooperative model in Anand, where farmers, as owners of dairy cooperative controlled the marketing, procurement, and processing of milk and milk products and replicated it nationwide. Amul invented the production of milk powder from buffalo milk.

This was so successful that this model was replicated to make India self-sufficient in edible oils.

Foundation of the dairy and its structure
Fluctuating milk production and surplus milk during flush season was the major problem faced by the farmers. Cooperative came up with a proposal and converted the surplus into milk powder. H. M. Dalaya, a dairy engineer who was batch mate of Kurien from America, invented the process of making skim milk powder and condensed milk from buffalo milk. This made Amul to successfully compete Nestle, and Glaxo. Dr. G. H. Wilster and his work led to production of cheese from buffalo milk.

Political and social conditions
The nationalist leaders were influenced by socialist ideals and the Gandhian philosophy of production by the masses against mass-production in a country of constrained resource. The new government was open to the modern skills and learnings, research, technological prowess, and aid from the world.

Consolidation of Milk Production
A visit in 1956, to Nestle in Switzerland was a turning point for Amul. He asked them to have more Indians inducted and reduce imports of Indian production. They remarked that making condensed milk “could not be left to the natives”.
He boosted Amul’s production and market of condensed milk in India; after two years this led to the government to ban the import of condensed milk.
During the 1962 Indo-China war, Kurien to provided supplies to the army diverting away from the civilian market. 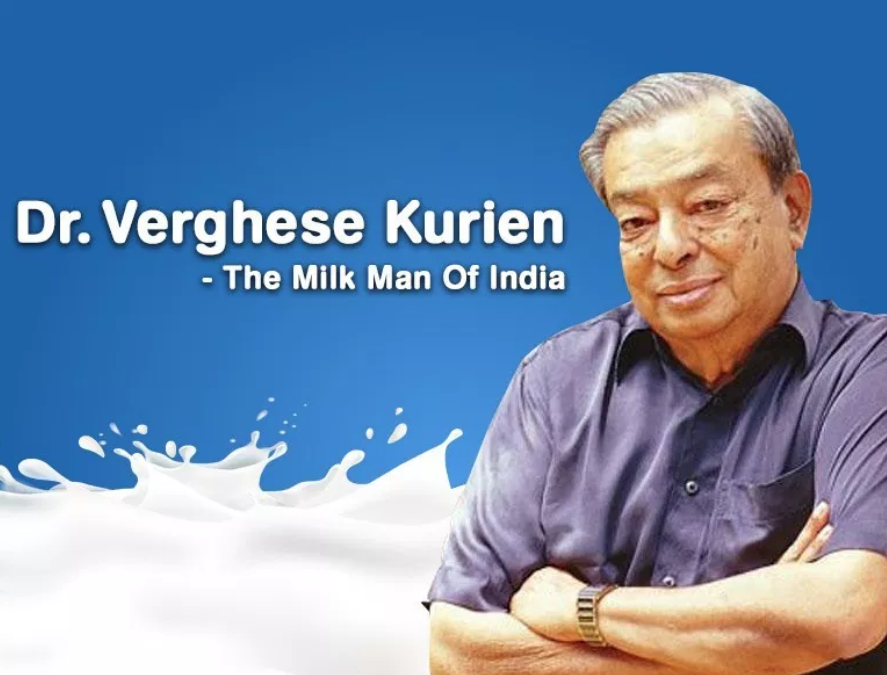 Spreading around and nationwide
In 1965, National Dairy Development Board (NDDB) was founded under Kurien.
The dairies of Gujarat were brought under Gujarat Co-operative Milk Marketing Federation Ltd. (GCMMF) in 1973. They sold their products under Amul brand. Based on this scheme many states set up their federations with varying degrees of success, notably, with Karnataka’s brand “Nandini”, Rajasthan’s brand “Saras” and Bihar’s brand Sudha, UP’s brand “Paras”
The Institute of Rural Management Anand (IRMA) was set up in 1979, to groom managers for the cooperatives.

Marks and international aid
Kurien set up cooperatives and plants, in fruits and vegetables, oilseeds and edible oil markets. Brands like – Dhara (Operation Golden Flow for cooking oils), Mother Dairy (Operation Flood) and Safal (for vegetables) have become household names.
Kurien also set up similar cooperatives abroad. In 1979, Kurien was invited by Premier Alexei Kosygin to the Soviet Union for advice on its cooperatives. In 1982, leading a World Bank mission was invited to Pakistan to set up dairy cooperatives. In 1989, Kurien and the World Food Programme helped China in implementing its own Operation Flood-like programme. He, in collaboration with NDDB in 1997 help set up a dairy cooperative in Sri Lanka.

Death
Kurien passed away on 9 September 2012, at the age of 90. He is survived by a daughter and grandson.